ABOUT MY TUMBLR BLOG

For many years I shared my artworks in my former Tumblr blog: lenbarboza.tumblr.com. It was a funny and pleasant experience that allowed me to interact with the people who followed my works. However, shortly after some issues with people modifying some of my drawings without my permission, in late January 2020, my blog received a sudden and massive amount of reports against my Inuyasha fanarts for alleged copyright violations, absolutely unfair accusations, as the images reported were fanart displayed there without any profit, just like the hundreds of thousands of fanarts constantly posted on that platform. The reports were even made against general personal posts that did not even refer to fanart or the series.

I did not receive any help from the Tumblr staff to solve that situation even when I contacted them several times, and my account was determined to be unfairly and arbitrarily terminated by Tumblr. By this situation, before they proceeded to terminate my account, I decided to delete it by myself on January 28, 2020.

However, later that day, my username lenbarboza was taken by someone unknown, that person, in the following days created an advertising spam blog, which remained active for a couple of weeks. That blog was deleted later, however, my old username is still in possession of that person.

Currently, my only accounts on the Tumblr platform are:

As I did mention above, right now the username in Tumblr lenbarboza is NOT in my power, so I want to make clear that any other blog/account in this platform using my name is NOT mine. 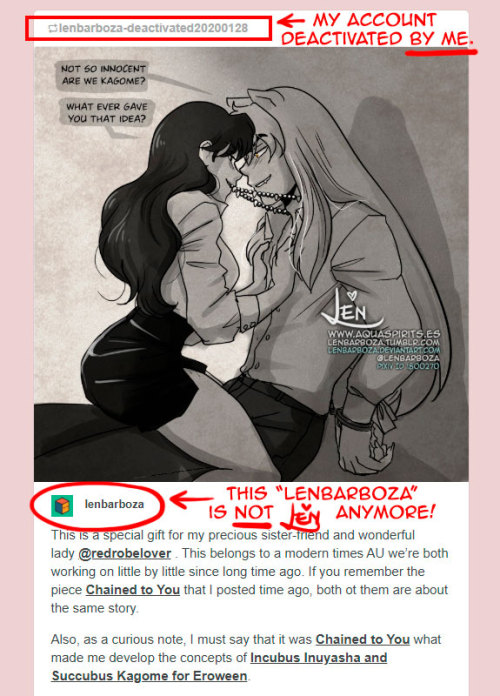